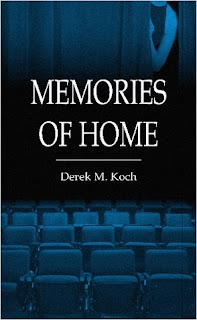 In honor of Valentine's Day, I present Memories of Home by Derek M. Koch (available for free download on Lulu). After growing up together, Max and Lisa have only been dating for a few hours. Unfortunately, they're now trapped by a sinister (if ill-defined) force in the Jefferson Theatre, an old-time movie house where Max once accidentally killed a man. As if this first date weren't already bad enough, Max's previous girlfriend also shows up, apparently possessed by the same nebulous evil and out for blood.

I know it's unfair of me to criticize Memories of Home. The novel was written in only 30 days as part of National Novel Writing Month (or NaNoWriMo). Koch readily admits in his introduction that the novel needs further work, which is why he is giving it away for free.

And Koch is not being modest when he says that Memories of Home is still rough. He does a credible job of setting up an aura of dread and mystery. However, once Max's friend (under the influence of the aforementioned evil) pulls a gun to force Max and Lisa to accompany him to the Jefferson, the story starts spinning in hamster-wheel circles. Various characters sporadically get possessed by the something, and then come to their senses. A variety of menacing, if somewhat haphazard, nasties chase our heroes around. Everyone runs several laps around the Jefferson, but no one ever arrives anywhere. Then the evil and the novel both just stop (when, I suspect, the 30 day NaNoWriMo window ended). I don't require everything to be explained in a horror novel -- indeed, I often think a novel works better when substantial mystery remains -- but here, the menace is not so much mysterious as arbitrary.

What's amazing -- and at times frustrating -- is how clearly Koch's talent shines through despite these problems. Even when the novel starts treading water, it does it with panache. The writing remains polished and effective, and many individual scenes are truly unnerving. The novel may have significant structural problems, but I nonetheless enjoyed reading it for the power of the discrete moments.

Which, ultimately, prompted this FreeBooks entry. I want to encourage Koch to keep up his efforts. I want him know that someone (someone he doesn't even know) is reading is work, and that I truly look forward to his next book. Because even horror authors need love on Valentine's Day (although I'm sure Koch will understand -- and, indeed, be grateful -- if I leave the heavy lifting in this regard to his wife).

For more information on Koch, check out his website and blog.

I have tried a lot of different programs and
found "Family Funds" to be one of the best,
They care about your success, It's easy to do
and I make about $50.00 dollars a day but it's
been growing monthly so the extra $1500 dollars
a month has been helpful, give it a try.
http://www.cash46.bigbig.com