Freebooks #6: How and Why Lisa's Dad Got To Be Famous by Michael Allen 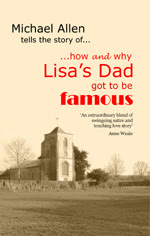 How and Why Lisa's Dad Got To Be Famous by Michael Allen (aka the Grumpy Old Bookman) is a quiet little book with a salacious-sounding plot: a reality show producer stages a show wherein Harry, the eponymous dad and an HIV positive man, must find a woman willing to sleep with him notwithstanding his condition. Despite a frank attitude towards sex and some rather explicit images (the climactic moment of the show is to be captured from within the woman on a pre-inserted miniature camera), the story is actually rather low-key and the satire rather benign (if only because the reality of reality television these days is already so extreme). If the novel (like the almost too salt-of-the earth, plainspoken Harry) lacks something in conflict and excitement, Allen nonetheless maintains a consistently congenial atmosphere that keeps the reader pleasantly interested and involved throughout the tale.

Posted by Devon Kappa at 5:36 PM No comments: