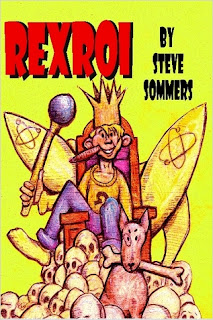 Poor Gary "Little Kid Guy" Gates. He's short, so no one in his frat respects him. His girlfriend is withholding her charms, forcing Gary to sneak around on the side. And Gary's fraternity brothers insist on humoring Alex, a local short-order cook who proclaims that he's the "King of the World" (and that Gary is his "General Monkey Dance"), even though anyone can plainly see that Alex is just a fat oaf.

Now things are getting even worse. Gary is experiencing blackouts and disturbing dreams, not to mention being blackmailed after an indiscreet fling with one of the nurse/stylists at the local blood bank/hair salon. Alex is becoming more and more popular at the frat. Soon Gary finds himself caught between mysterious forces in an epic battle to determine the fate of the world.

It can only end with exploding cows.

There is no reason to assume that Steve Sommers was a self-important twerp in college. After all, this is fiction. From the other goings-on in the novel, I doubt that this is a reality-based roman à clef. But I have to give credit: Gary Gates is an all too believable obnoxious frat boy protagonist.

Happily, the results are consistently entertaining. Gary may be insufferable, but his egocentric narration perfectly complements the bizarre scenario. On the one hand, we never care much about Gary as a person. He often causes his own problems, and at times crosses the line from obnoxious to outright loathsome. But on the other, his tart recital lends the proper bitterness to a tale that otherwise would deflate under the weight of its own essential silliness. Indeed, reading Rexroi is a bit like watching an inebriated frat boy perform a monkey dance on a ledge: a bit uncomfortable for the audience, but also quite amusing if you're in the right mood, and, perhaps against your better judgment, impossible to turn away from.

Rexroi is available through Lulu as a pdf download ($1.81) or a paperback ($11.95). Steve Sommers appears to have had a number of websites over the years, including here (a blog about Sommers' various Lulu books) and here (a site about Sommers' first novel, Breakfast with the Antichrist). However, I am unclear as to whether either of these (or some other site) is still active.

Los Angeles-based Channel 101 and its New York offshoot Channel 102 present monthly five minute DIY "television episodes" that are submitted by members of the general public and voted on by fans at monthly live screenings. Shows that score in the top five are given the honor of returning the following month; below that cutoff, the show is cancelled. All shows are archived on the respective websites and freely available for perpetual viewing pleasure.

One of my favorite Channel 102 series (on which its producers voluntarily pulled the plug) is Shutterbugs, a hilarious series about two self-important jackasses who run a talent agency for child stars. Check it out, along with the rest of the oft-outstanding lineup (Channel 101's Time Belt is particularly great).