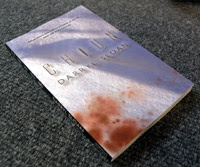 The end of the world doesn't come with a bang. It sneaks up, as quiet and beautiful as the falling snow.

Seven-hundred students are trapped at Clounagh Junior High School. Among them are Jamie Metcalfe and Tara Morton, the girl Jamie secretly loves. No one is coming to rescue them. No one can.

Jamie has secrets of his own. But he's determined to do whatever it takes to save Tara. Even if it means venturing outside. Into the snow.

Good literature can captivate a reader of any age, and a young adult novel can fully entertain an adult audience. I didn't read Shade's Children by Garth Nix until well past my teen years, but, although labeled a "young adult" novel, it remains one of my favorite works of post-apocalyptic fiction. The Fire-Us Trilogy, set in a world where a plague has wiped out the entire adult population, also starts spectacularly, although it peters out at the end with a too-easy resolution.

I similarly enjoyed Chion, a young adult apocalyptic novel, for almost all of its length. The story starts strong and quick. The scenario is convincingly nightmarish and fiendishly clever. The narration is intimate and natural (although a shift in focus halfway through from one character to another jars a bit). The school setting is fresh even in the face of the standard apocalypse tropes (escalating panic, violence, and hopelessness), and Jamie's secret adds an intriguing twist. And Jamie's plan of escape is clever and plays fair, leaving the reader excited to follow wherever Sloan leads.

Unfortunately, Sloan doesn't lead as far as I wanted to go. Part of this is just wanting more. Chion is quite short, closer to a novella than a full length novel. The book and Sloan's writing are compelling enough that I hoped to spend more time with Jamie and Tara.

But even apart from its brevity, Chion's end is too abrupt. The story just kind of stops, as though Sloan couldn't think of anywhere else to go. Even worse, the conclusion seems to backpedal from much of what previously made the story compelling. I understand the character arc that Chion is trying for, and, in its modest way, it succeeds. But so much of the novel is so good, I wish Sloan could have carried his vision through to a grander place.

Chion is available through Darryl Sloan's website as a $7.99 paperback ($12.99 including shipping from the U.K.). Sloan's website also features an entertaining blog and free short films, while Darryl's Library (linked at right) provides book reviews (including some reviews of POD books).

Comics used to be considered a juvenile art form, although that perception has largely faded. As with novels, a good comic can captivate a reader of any age. One online comic that I enjoy is the Post-Nuke Comic, a harrowing series (divided into several online "issues" and still ongoing) about life in a post-nuclear winter. The most frustrating thing about the Post-Nuke Comic is the long gap between pages being posted; I'm constantly chomping at the bit for the next installment.