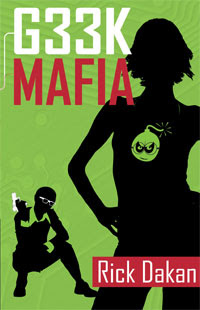 Paul Reynolds' business partners have just told him that his services are no longer required at the company he helped establish. A band of free-wheeling, high-tech scam artists, led by the beautiful Chloe, offer to help him obtain the severance package he feels he deserves. Now Paul is becoming ever more involved with Chloe and her crew, leading a more exciting -- and dangerous -- life than he ever imagined.

I first learned about Rick Dakan's Geek Mafia through an ad he placed on Boing Boing. Although certainly an expensive investment, it appears to have paid some dividends in terms of attracting readers (and Cory Doctorow's subsequent very positive review on Boing Boing undoubtedly helped as well). Whether he ever recouped this investment, I admire an author who is aggressive enough to put advertising money where his pen is.

And Geek Mafia deserves Dakan's vote of self-confidence. The novel reads like a fun Hollywood motion picture, filled with colorful characters, fast action and escalating double-crosses. Geek Mafia may also share some implausibilities with summer popcorn flicks -- how is it that beautiful women always fall so quickly and soundly for the nerdy nice guys in these stories -- but so what? The point here is simple enjoyment, and Geek Mafia delivers.

Geek Mafia is available as a free pdf download here. If you enjoy the book, consider buying the cheap $5 paperback here. Like any good cinema-style romp, a sequel is already well underway.

Geek Mafia is an awesome book, and the sequel is no doubt also excellent, but did you see what the author, Rick Dakan, is up to now:

WANTED - INFORMATION LEADING TO THE CURRENT LOCATION OF:

REWARD. Anyone submitting information leading to the confirmation of Rick Dakan’s current whereabouts will be awarded one of a number of prizes, ranging from a full-course dinner to mention in “Stealing Your Own Privacy”, a book to be published during 2008.

If you know Rick’s current location, or can offer any leads, please immediately send an email to:

or call and ask for Big Pig.

FOR UPDATED INFORMATION ON THE HUNT FOR RICK DAKAN, ENTER THE HUNTING RICK DAKAN BLOG HERE.

(IMPORTANT NOTE: This website has been posted in connection with a contest between Rick Dakan, a well-known novelist, and Steven Rambam, an Investigator and the Director of Pallorium, Inc. Rick Dakan is not wanted for any crime, and Rick is believed to be an honest law-abiding novelist … who is being hunted.) …”