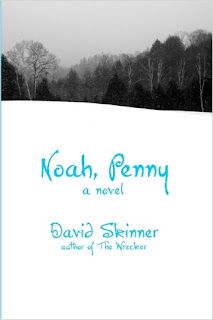 Unfortunately, Noah is awkward and unreadable. Does he feel the same way? They've been friends for years, but this is new terrain.

And the sudden appearance of Fyfe, an ancient elfin creature who's interested mainly in spying on the affairs of humans, is not making Penny's life any easier.

David Skinner's Noah, Penny is a contemplative, touching novella that, though brief, has a lot to say about how we relate to each other.

I first discovered Skinner over a decade ago, when I was wowed by his The Wrecker (Simon & Schuster 1995). That novel explores questions of good, evil and free will in a manner that, if infinitely more restrained in its imagery than Anthony Burgess' A Clockwork Orange, is no less effective for its subtlety. Whereas The Wrecker can be seen as a rumination on hate and violence, Noah, Penny, by contrast, is a charming meditation of first love. Although both novels are formally works for the Young Adult market, both offer tremendous rewards for the adult reader as well.

Quiet and a bit melancholy, Noah, Penny doesn't rely upon a formal plot. Rather, it explores Penny's situation -- and, ultimately, the nature of love and acceptance -- through a series of generally understated vignettes that follow her halting, uncertain relationship with Noah. Skinner demonstrates a deep, sympathetic understanding that matters of the heart are, ultimately, beyond rational explanation. Penny's story is sad and sweet and real in all the right places. And far from being a jarring intrusion in this otherwise naturalistic tale, the age-old Fyfe instead adds a perfect touch of magical realism, ultimately teaching that the questions Penny faces are not new, but are, indeed, eternal.

Noah, Penny is available as a paperback from Lulu, as are several other of Skinner's self-published books. (The Wrecker is available used on Amazon.) Skinner's website is located here.

The animated zombie movie City of Rott is not quiet or subtle. It is the extraordinarily violent tale of an old man seeking to survive -- and to find new shoes -- in a post-apocalyptic world populated primarily by the undead (or, more specifically, dead corpses controlled by alien space-worm-parasites). The violence is graphic and never-ending, if somewhat charming in its cheerful excessiveness.

I suspect that the audiences for City of Rott and Noah, Penny overlap very little. Moreover, Noah, Penny is far more successful and involving than the oft-monotonous City of Rott. Nonetheless, the two works are similar in at least two respects. Both focus primarily on mood and individual moments rather than a detailed plot. And both end on a note of grace that, each in its own way, celebrates the human spirit.

And as a special added bonus recommendation, check out this panel from the increasingly popular xkcd webcomic.

There is an obligatory crisis around the three month mark of a blog. Glad to see you out the other side of it :)

Hey, it's the thought that counts, and thanks for coming back after my long absence. :)

Thank you for the great review. I do appreciate it (and I call it out back on my blog).